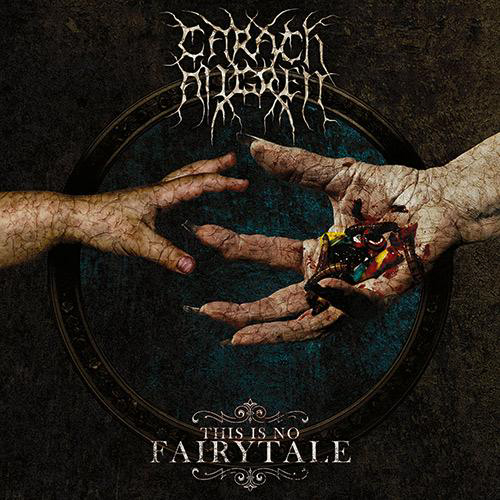 CARACH ANGREN – This Is No Fairytale

Carach Angren returns in 2015 with a new story to tell. Last time they told us different war stories while this time, it’s a grim and dark version of Hansel and Gretel (along with some other snacks).

The album starts off in a similar way as the previous albums, with an intro, consisting mostly of symphonic elements and some choirs. This time there is no speaking on the intro track.

The intro flows neatly over to the first song, "There is no place like home". Really grim notes and even darker and grimmer lyrics. The song focuses on a man that constantly abuses his wife (and kids) in various ways. The lyrics are quite visual and they fit awfully good with the dark melodies. The song can be a bit heavy (in terms of the theme) for some listeners, and that is exactly the point with the musical genre.

Next song, "When Crows Tick on Windows" progresses the story onwards to the death of the mother in the family. The song is musically a beautiful piece. Downright enjoyable. Nice, calm violin pieces and fast drums and guitars mixes quite nicely and it works very well. The saddest, yet most beautiful part of the song is when the mother is stated as dead. It seems as if the band intentionally wanted to show that she finally got her peace.

"Two Flies Flew into a Black Sugar Cobweb" follows the children in their escape from their abusive father. This is the point where the story starts to resemble Hansel and Gretel. The children end up on a playground where they meet a clown. The clown is a good example of a point where a metal band decides that they can have a bit of fun with their own material. Musically, the song is fast paced, and alot of fun. Carach Angren brings out the dark music quite nicely, and the song gets quite creepy near the end.

The fifth tune is named "Dreaming of a Nightmare in Eden". It goes in to a weird, circus like atmosphere, musically, while the lyrics tells that the gingerbread house becomes a house made of decayed flesh. Truly a house of nightmares.

"Possessed by a Craft of Witchery" goes a bit more in to the children’s actual experience of the "gingerbread house". They arrive at the house and sees that the house is truly not a house of fairytales. The composed music is absolutely amazing in this song. Carach Angren have included so many elements, and they mix really good.

In "Killed and Served by the Devil" it seems very much like the children’s tale is coming to an end. The boy gets stabbed in front of his sister who is in a cage. She then gets enslaved my the murderer. The song is mostly a very dark experience. The melodies are pleasantly grim, and it keeps up a strong pressure from start to finish.

The title "The Witch Perished in Flames" gives anyone who has ever heard the fairytale of Hansel and Gretel associations of a fairytale coming to an end. A grand musical number to lead the audience in to the final act.

"Tragedy Ever After". The girl wakes up in a forest, halucinating and hearing voices. She feels trapped and starts running away from where she is. She is found by the murderer, and ofcourse wishes that it is a dream. Suddenly she wakes up from what we all realize was quite a pleasant dream compared to what her reality is shaped like.

Carach Angren are great musicians, and this album is proof of that, but what is even better is their ability to tell a story through their music. Every song on the album is important, because you don’t want to miss any part of the grim story that is being told. The music and the lyrics sometimes seems a bit awkwardly matched, but that may very well be the point. You never know exactly what you’ll get with Carach Angren, except for one hell of a good and dark story.