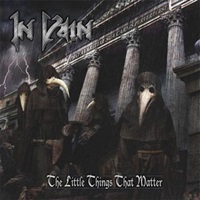 IN VAIN – The Little Things That Matter

It’s always nice when a band seeks out your critical opinions based on earlier reviews of previous material. Spain’s In Vain met my approval on their second album from 2012, "In Death We Trust" – and still plug away independently on their third full length "The Little Things That Matter". The 9 songs appear to continue their affinity for all things German power metal related – guitar harmonies, double bass, and loads of high pitch vocals their calling card (even if guitarist Daniel Cordón struggles to stay in key).

A Wild West intro feel gives way to a heads down riff charge on "Serenity Valley", combining a lot of the power of Running Wild with a touch of the 80’s North American attack from say Agent Steel or even a touch of Annihilator. Classical touches on "The Ballad of Lucifer" keep the melodic side in focus, the speedier high guitar harmonies and background mead hall vocals sure to put this one in the In Vain set list forever. Daniel Blanco Martín along with the aforementioned Mr. Cordón layer their rhythms and harmonic break duties like the best traditional/power metal bands should, again bringing a lot of older Running Wild and Helloween to mind.

Expect songs about dragons, warriors, kings, and mystical history at the forefront, which matches up well to the speedier musical style In Vain display. The longest song "The Last Waltz" closes the album, at 8:13 definitely a track that will recall a lot of the greatness of Iron Maiden epics. Starting off very soft and building up the intensity, you’ll hear plenty of instrumental interplay that advances the track in a militant, galloping/ march manner while a keyboard refrain ends the album.

I’d say those who love speedier German-oriented power metal will have room for "The Little Things That Matter" in their collection.