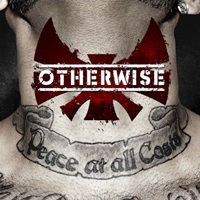 OTHERWISE – Peace At All Costs

Straddling the fence between modern hard rock and alternative sounds, Las Vegas, Nevada’s Otherwise release a second album that contains a lot of requisite trademarks for major commercial acceptance. Be it through the gritty screams and clean melodic chorus work of singer Adrian Patrick, the easy on the ears rhythmic template set by drummer Corky Gainsford, or their insistence in getting to the hook on any level early and often – "Peace at All Costs" has as much in common with Stone Temple Pilots and Three Days Grace as it will The Foo Fighters or Alice in Chains.

Which puts my feelings into a quandary – as much as I think "Darker Side of the Moon" and the commercial, acoustic elements shine through for "Never Say" work for Otherwise, it’s not as if the quartet really are stretching the boundaries for what seems to be accepted across corporate radio these days. The obvious staccato-laden aspects on the guitar for the peppy "The Other Side of Truth" make me think a little more of fellow Nevada act Five Finger Death Punch, while the heavier side comes out on "For the Fallen Ones", the main riff and melody stacking up firmly to provide a battering ram of an a arrangement. Couple this with a lot of love/ lost relationship subjects covered on the lyrical side, added keyboard/orchestral moments for the ballad "Meet Me in the Dark" and you’ll find that this will be a record that gains modest appeal to audiences who love North American hard alternative sounds, packed with low tuned grooves and easy on the ear melodies – but doesn’t really challenge the norm.

12 songs in the main (plus an intro and "V" piano oriented interlude) gives you a tidy 45 minute sophomore outing – "Peace at All Costs" to me is looking to share a lot of the glory of Shinedown, but doesn’t really distinguish itself from the hundreds of others chasing their coattails.

CRUACHAN – Blood for the Blood God