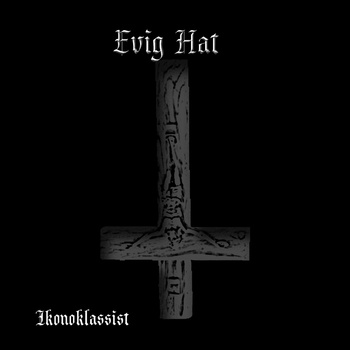 The album is built up in a very special way, and it is easy to choose favorite parts. The backside of the medal is that most other parts seems a little bit dull and uninspired at times. It would maybe be a smart move for "Satan" to wait a bit longer with his next release, and maybe work more with removing some of the musical flaws.

Den Dødes Rett is a great mixture of melancolic melodies and dark atmosphere! A worthy opening for the album. It seems like "Satan" has been working quite alot with his material, and as luck would have it: it pays off in the first track of "Ikonoklassist".

The second track on the album, Lyngbrann, seems more agressive, which suits the band’s name and profile. Around three minutes into the song comes an acoustic part with a solo that is quite unpolished. It might fit some peoples taste, but the solo was a bit out of tune, and the whole part could have been removed without too many people missing it.

The titletrack of the album, Ikonoklassist, takes it a bit down to earth when it comes to the pase and feel. Quite atmospheric, the song sends out dark thoughts, which gives the picture of a rainy graveyard. The song itself feels very systematic in a good way. If anything, it was a bit too short.

The song Vannhellig is starting off as a song that is very much like "Fuel for Hatred" (Satyricon), but changes drastically very quickly. However it seems like the song is like Ikonoklassist, only less interesting. A bit cheesy, but it had some high points as well, namely the clean guitar part at about 4:30.

Forvist is the song that starts off the back half of the album, and it does so with a very interesting drum sequence and some cool bass lines. However, the song feels like its being dragged out for a bit too long after the clean part.

Den Tapre, Den Falne has the absolute coolest guitar parts of the whole album, and it feels like it is on a mountaintop above most of the other songs. It gives a mental picture of an infernal battlefield, and it is amazingly enjoyable! The songs end is a beautiful piece of guitar composition. Really worth sitting through the whole song.

The least interesting title on the album proves itself to be one of the more interesting songs. Ragnarok has the strongest feel of black metal of all the songs on the album, and it is quite enjoyable to know that it is still possible for some to make something like that. The song reminds of a war march.

En Himmel i Flammer was sort of the opposite from Ragnarok. The title was interesting, but the song itself was a bit less interesting. Some interesting bass parts, but sadly, not enough to save the song from the maybe a bit boring feel.

Last, but not least, there is Drapstanker, which reminds of an action movie moment. Epic ending for an album that was a good experience. A bit monotone, but in a special way. A way that makes you want to hear the whole song.

Not the best or most interesting album out there, but quite far from the worst album as well.