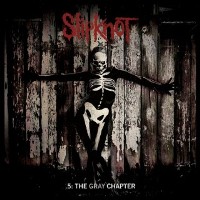 Five albums in, a controversial line-up change and a death in the family. So how are Slipknot holding up? The answer isn’t entirely clear. For the first half of the album, it seems they are in the best form of their lives. I haven’t seen as high a blastcount from the masked marauders before and Corey Taylor is growling his heart out. This is the type of Slipknot I like. Yes, there are slow, weird bits but they add to the atmosphere and even the not so heavy parts work well. The hooks are heartfelt and the songs well put-together. What works best for me is the fact that Slipknot are referencing their thrash, death and extreme metal roots quite liberally during these tracks. But then we get to side two and things change. From here on out they are back to the ol’ Nu Metal stylings. It all feels less well considered and the songs don’t really interest me too much. Firstly, because Nu Metal is a load of shite and secondly because the songs just aren’t that good. We know Slipknot can do better, from ‘The Subliminal Verses’ and the better numbers on the first side of this release.

One for the die-hard fans only I’m afraid.