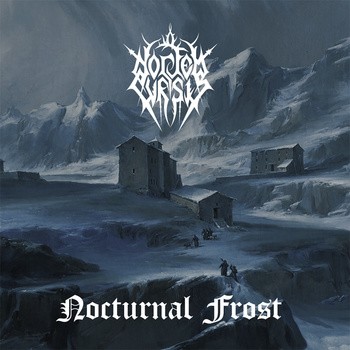 The French black metal entity known as Noctem.Cursis unleashed its debut album containing 9 songs a few months ago. Musically speaking, the album, which is entitled "Nocturnal Frost", draws pretty heavily on some of the old Norwegian black metal titans and releases dating from the blackened 90s. Noctem.Cursis performs symphonic, epic, and melancholic black metal consisting of grim vocals, lots of keyboards and synth-parts, and catchy and rather sombre riffs. While some of the old Dimmu Borgir records certainly come to mind, I am also reminded of some of the first couple of Satyricon, Gehenna, and Troll records. The thing is that Noctem Cursis consists of six members who all sound pretty skilled to some extent, and some of the songs are quite well-written and nicely arranged and so on, but they never really reach the heights of some of the pioneers and leaders of this particular genre, which is a shame. "Nocturnal Frost" is not a bad or totally uninteresting album, but it does lack some of the punch, moodiness, and, quite simply, greatness that many others before them have displayed. The album is decent and has its fair share of cool parts and elements, but as a whole it never really takes off and blows everything else out of the water.