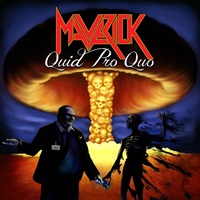 Traditional street level hard rock has blossomed over the past decade – the Sunset Strip dominance in the 1980’s stateside sprouting a boatload of impressive second and third generation acts, especially on European soil. Add Maverick to the list of younger bands looking for their stake in the scene, as this debut album "Quid Pro Quo" contains all the requisite hooks, melodies, and energy to make a stellar impression.

Belfast, Ireland is their home territory, and these 11 songs have a lot of that shimmering production and larger than life choruses that made bands such as Dokken, Skid Row, and Warrant staples of the scene. Vocalist David Balfour shines in a variety of his ways – smooth control in his melodies and injecting the right soul and power when called for, almost like Brian Howe during his Bad Company days on highlights such as the highway cruising "Got It Bad" and swanky "Electric". The guitar riffing of Ryan Sebastian Balfour and Ric Cardwell has a lot of hallmarks from Aerosmith and Skid Row where both are building the chord progressions for the big chorus and instrumental moments – check out the "Rebel Yell" like fever for "In Our Blood" or the more mid-tempo, playful follow up "One More Day (Quid Pro Quo)" where the picking has this natural bouncy appeal, the latter displaying some solid melodic lead break work.

Lyrically focusing on the love, sex, and party lifestyle, Maverick know how to keep the arrangements kicking with choruses that leave you humming for days- "Rock ‘n’ Roll Lady" and "Snakeskin Sinner" (featuring an opening riff similar to Black Sabbath’s "Neon Knights") are two that hit home the most to these ears. I’m so happy that in 2014 the melodic hard rock/ metal genre still pushes forward and it seems that quality is winning out of quantity – as such, "Quid Pro Quo" is a very worthwhile debut record to own.