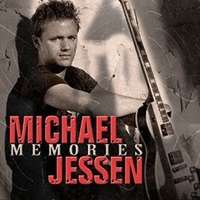 Danish guitarist Michael Jessen started playing guitar at the age of 15 in the mid 1990’s, slowly working his way up the scene and finally unleashing his debut solo album "Memories". Featuring the fine vocals of Göran Edman (ex-Yngwie Malmsteen) and backed by a solid rhythm section of bassist Christoffer Hoaas and drummer Mads Grunnet, I’d say the 10 songs overall straddle the line of classic rock and modern/melodic hard rock.

Keeping the songs tight and focused allows the big chords to ring out and vocal hooks to capture the lion’s share of attention – especially evident on the Zeppelin meets Whitesnake-esque "My Own Funeral" and the monster groove number "Dreams Die Hard". Europe’s John Norum contributes a lead break to "Blackwater", and overall you can tell that Michael Jessen has a similar philosophy and style as acts like Europe and Bon Jovi, arena oriented material that doesn’t get too fancy but gets the job done.

The ballad "The Rose" gives Göran a chance to reach deep into his bluesy bag of tricks during the verses, the guitar work from Michael very understated and supportive, much in line with what you’ve come to expect from say Riot or Vandenburg through the years. I’m hopeful that those who’ve dug the back catalog of Richie Kotzen and want to take advantage of a punchy, in your face production will find "Memories" an easy purchase to make.

As we are ending 2014, be sure to seek out Michael Jessen if you want a release that has guitar hero facets but isn’t so ‘shred/maestro’ oriented, as there is some killer songs here.