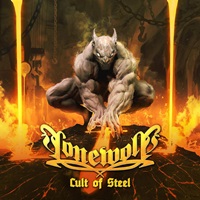 Rare is the day that you’ll find a band releasing three consecutive studio albums in back to back to back years – and that’s the case here in French heavy metal band Lonewolf. Shifting to a new record label, this seventh studio platter "Cult of Steel" continues their true, classic style that makes no apologies for its stance – sticking to the ideals of anthem power, choruses that implement group participation and a healthy supply of double bass work and guitar harmonies to maximize fist flying, hair waving great times.

To those familiar to the German style of old power metal – the two bands coming to mind the most Grave Digger and Running Wild – Lonewolf’s output, execution, and performances on songs such as the jackhammer quick "Hordes of the Night" or its mid-tempo counterpart "Werewolf Rebellion" resembles those acts. Rhythm guitarist Jens Börner has a hoarse, throaty delivery on the vocals, not heavily accented but a bit better than Chris Boltendahl of Grave Digger. Those who love a host of twin lead melody tricks and cultural textures, check out Alex Hilbert’s fleet fingers in conjunction to Börner for clear highlight "Blood of the Heretic" as this is textbook true power metal for audience approval.

Occasionally breaking up the speed tracks are offerings that possess a little more evilness or epic trilling, such as the organ strains for "Funeral Pyre" or the almost folk-like measures on the 6 minute "Mysterium Fidei" – proving that Lonewolf is not always pushing out speed for speed’s sake. Having had the chance to take in their last two albums, I would say "Cult of Steel" is heading the band back in the "Army of the Damned" direction of appeal, a marked improvement in terms of songwriting from last year’s "The Fourth and Final Horseman".

Those that certainly miss the glory years of Running Wild (when they weren’t afraid to accelerate the tempo) will find "Cult of Steel" supreme, true, and metal to the bone.

ORANGE GOBLIN – Back From the Abyss

STEIGNYR – Tales of a Forgotten Hero