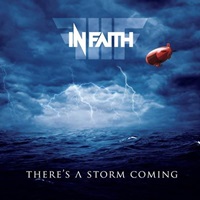 IN FAITH – There’s a Storm Coming

When done correctly, melodic hard rock has a special place in my collection – as artists hone in on crafting catchy songs with strong hooks on the vocal and musical sides and let their playing ability shine as a result of the compositions at hand. In Faith is a new British band that contains veterans of the scene – drummer Pete Newdeck from Edens Curse, guitarist Tony Marshall played in Vaughn, and vocalist/ bassist Pete Godfrey sang in a number of Manchester outfits during the 80’s and 90’s. Their debut album "There’s a Storm Coming" is a two year labor of love, finally resulting in the 11 songs before us.

Pete Godfrey’s voice has a lot of Kip Winger power and resonance, tender when called for in a semi-power ballad like "Where I Wanna Be" or high energy and a touch bluesy for the opener "Radio". Musically these songs cross a lot of American acts such as Danger Danger or Tyketto, along with a touch of Def Leppard/ "Hysteria" time period chorus harmonies and maybe a bit of the recent Scandinavian brigade like H.E.A.T. or Dynazty. Tony’s guitar work can be mean and dirty if the arrangement calls for it, as "All or Nothing" illustrates, and then he can throw up some classic, rally cry chord progressions and lay down some sweet lead licks on the follow up "In Flames" that prove he has the skills to get the job done.

In Faith carefully set up the album to ebb and flow like the changing tides – as the best melodic hard rock albums express varying feelings, moods, and tempos. The simplicity of the cover art, the potent and professional production values, and the 48 minutes just flew by to the good. Be it more AOR-ish for "A Million Ways" or restrained on "If That’s What Love Means" that would have been a certain top 10 chart buster in the 1980’s, In Faith possess all the tools for creating long-lasting material.