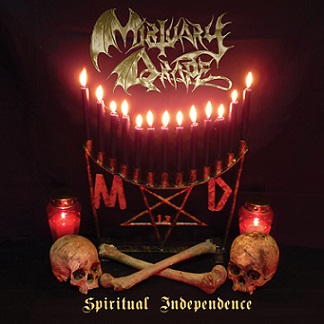 Iron Tyrant took charge and now we finally get to see a new release from cult act Mortuary Drape. It´s been 10 years since the somewhat dissapointing "Buried in Time" was released so it was quite exciting getting "Spiritual Independence" in the mail.
Mortuary Drape hails from Italy and startet out back in 1987 so you can for sure call them pioneérs of the extreme metal scene. Their unique formula of death/black metal with heavy focus on religion have made them quite an name in the underground.
They have never mangaed to get out the underground during all these years and "Spiritual Independence" will not do anything about that.
This is occult extreme metal for the specially dedicated among the hordes of metal fans.
The production is somewhat murky but clear enough to get all the riffs and vocal deciphered. Personally I like what I hear on SI and in my book Mortuary Drape get´s the thumb up. They dont invent anything spectacular on SI and they dont need to either. This cult act deserves the to be recognised among the true pioneérs of the genre and SI is a decent enough comeback album that for sure will get a lot more play time on my speakers.