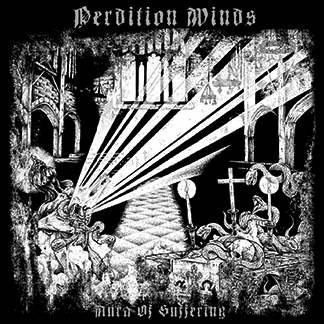 Perditions Winds were spawned back in 2010 and Aura of Suffering is their debut album. Musically, we are talking somewhat fast-paced, intense, and violent black metal not entirely unlike certain French black metal outfits. However, Perdition Winds do vary their songs by means of slower sections and melodic riffing from time to time, which adds a bit of variety to the whole thing. The vocals are very good and pretty damn convincing in that the vocalist, J.E., really sounds like he means fucking business whenever his loathesome and blasphemous utterances are heard. There are some rather interesting nuances hidden underneath the chaotic and yet delightfully furious and aggressive music, and the 6 rather long songs that constitute this album are a solid and nicely sickening slab of dark and morbid black metal that should appeal to most fans of the genre out there. It does what black metal is supposed to do!