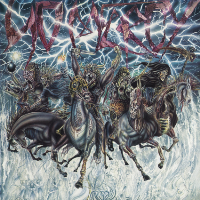 Before this file came into my mailbox, I had no idea about the existence of No Mercy, even though I have been a fan of Suicidal Tendencies since the mid-80’s. For those of you in the same boat as me, No Mercy were basically a punk/crossover act featuring Mikes Muir and Clark. Their debut ‘Widespread Bloodshed’ was originally released in 1987, after which half of their members left. The simplest thing to do then was to merge the bands with Clark joining ST and the second NM album (more or less) being released as the 3rd Suicidal album ‘How Will I Laugh Tomorrow’. Sadly, in my opinion this marked the end of ST as they moved in a more thrashy direction and never recaptured the glory of their early days.
So what about ‘Widespread Bloodshed’? Not as quick and punky as early ST, but still with plenty of ultra fast riffing and a hardcore attitude. As you can guess, No Mercy are a little less crazy and a little more metallic. Mike Muir is Mike Muir. You either like him or you don’t. I like the early stuff and nothing after the 80’s so his performance on this one is fine in my book. Not much else I can say about this other than that it did manage to scratch my chronic itch for decent 80’s crossover and that is always a good thing.