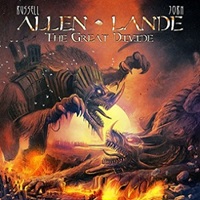 Returning for another album are premiere vocalists for the power/progressive metal genre in Russell Allen (Symphony X, Adrenaline Mob) and Jorn Lande (ex-Masterplan, solo). Handling the bulk of songwriting, guitars/bass, and production duties this time is Timo Tolkki, a change in scenery from Magnus Karlsson (Primal Fear). This fourth album "The Great Divide" is a relatively straightforward metal affair, 10 songs that should meet approval for those into Tony Martin-era Black Sabbath, Dio, and melodic, European power metal that isn’t necessarily blazingly up tempo.

Highlights are numerous. "Dream about Tomorrow" has this "Future World" oriented anthem quality to it, both voices shining together during the chorus and the verse tradeoffs magical. "Down from the Mountain" possesses a killer guitar lick a la Judas Priest and heads down drumming that keeps reverberating in my brain. "Reaching for the Stars" combines lush keyboards and a propulsive mid-tempo foundation with mysterious melodies, something that I believe would have made this a top 10 hit song on rock radio formats worldwide back in the 1980’s and early 1990’s. And when it comes to ballads, Jorn can do no wrong on "Bittersweet" – Timo playing a complementary namesake lead break in line with Adrian Vandenberg or John Sykes.

In the end, it’s all about putting these two professional singers in the best spotlight possible, and when you have a seasoned songwriter and producer like Timo Tolkki involved, the results can be masterful. It make take 3-4 years to get a new album from the duo, but good things come to those who wait. Another stellar release for those who love solid, bluesy power vocals over heavy metal from the heart.