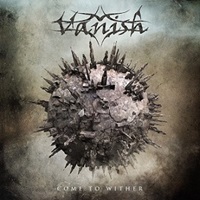 This German power metal band has taken their time to release their second album: eight years have passed since their independent debut "Separated from Today" – with a three song EP of the same title as this album coming out in 2010. Those same three songs – "The Grand Design", "Bless the Buried Child", and "Hollow"- appear on this second record as well as 8 newer tracks – making this a 61 minute album of metal that straddles the power/progressive lines.

Upon initial listens to the record, I felt a lot of similar qualities to current Symphony X if taken through a Brainstorm meets Superior band template. The guitarists Thomas Rösch and Philipp Schönle like to end many of their riffs with little squeals and modern nuances, and the keyboard work has a flair for the dramatic – while vocalist /keyboardist Bastian Rose has a multi-layered voice that is very similar in tone, attitude, and strength as Russell Allen. Where I think Vanish differs from the Americans is their penchant for more straightforward parts in the majority of their songwriting, and less neo-classical arpeggio runs- but that’s not to say they can’t dazzle in their musical chemistry. Check out "Renewal" and the 9 minute tension filled "Curtain Call" for some superior guitar/ keyboard/ bass/ drum fusion and point/ counterpoint elements.

Sometimes the band get a little too predictable for my liking – matching up the riffs and vocals in a way that is just pedestrian or what I would expect for a beginning band, not an act who have been together since 2000. Heavier material like "Silence" and a somber ballad such as "Reboot" keeps the second half of the album interesting which a lot of other bands should think about, especially in the age of longer full-lengths- and a guest appearance from Primal Fear’s Ralf Scheepers on "The Grand Design" is a boost for the band’s profile. "Come to Wither" overall is an entertaining release, they possess a lot of intuitive sensibilities for the genre – and you can’t go wrong when you have a strong, dramatic vocalist riding over the top of this. Hopefully the follow up comes in a reasonable 2-3 year framework.