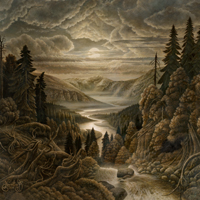 The well-known French avantgarde/experimental black metal band known as Blut Aus Nord have been extremely productive and creative ever since the turn of the millenium and have released a number of highly fascinating, captivating, and memorable albums and releases, most notably the 777-trilogy. The latest output, Memoria Vetusta III: Saturnian Poetry is, in a sense, more black metal than avantgarde, which is to say that the ambient-like experiments and otherworldly soundscapes that were to be found on the 777 albums have been toned down while the melodic black metal moods and atmospheres of old have crept back into the mix and been brought to the forefront. I am tempted to say that this new album of theirs is more accessible and easier to digest compared to the last few outputs, but that does not mean or indicate that Blut Aus Nord are any less interesting because of that. On the contrary, the strong melodies, the beautiful tremolo riffs, the classic-sounding synth parts, and the grim vocals are reminiscent of some of the classic black metal albums dating from the first half of the nineties and yet with that unmistakable Blut Aus Bord sound and feel to it. The 7 lengthy songs that comprise Memoria Vetusta III: Saturnian Poetry are so goddamn atmospheric and strangely hypnotic that I find it difficult to sum up in words. Listening to a slab of melodic black metal that is as well-structured and well-written as this is invigorating in this day and age. All you black metal scumbags out there ought to check this one out!