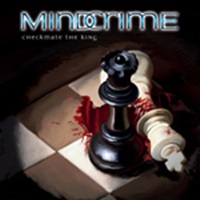 Shouldn’t really be a shock to the system that this Italian metal act has a lot of Queensryche qualities on their debut album "Checkmate the King". Especially based on name alone… we get 11 songs of very strong Tate-oriented vocals and music that has that climbing/ traditional quality. Unfortunately, lack luster production values (a very thin drum sound, guitars and vocals overpower) and suspect hooks/ choruses leave songs such as "Flying in the Wind" and militantly robotic "Spell You’re Under" cutting room floor, bar band efforts.

There’s a time and a place for ascending up the note ranks, and I feel that vocalist Bruno Baudo certainly possesses the pipes, but needs to know when to seek out the lower melody and not always reach for the stars – especially for the longevity of Mindcrime’s original material. His bluesy, restrained nature during some of the verses of the ballad "Once upon a Day" should be something further explored, as well as the acoustic touches to the electric riffs from Maurizio Taccioli and Michele Serra, who use lead breaks in the best way possible and not succumb to the shred Olympics. Another possible sign of a decent future is in the Firewind meets Jake E. Lee guitar licks employed during the up tempo "Life on the Run" – the drumming very in the pocket and solid and harmonies abound from both guitarists while the ending has a lot of similarities to "Bark at the Moon".

If Mindcrime hope to make a name for themselves with their original songs, I think they need to step away from the obvious addiction to Queensryche and develop diverse melodies, otherwise they’ll never make it beyond hometown hero status.