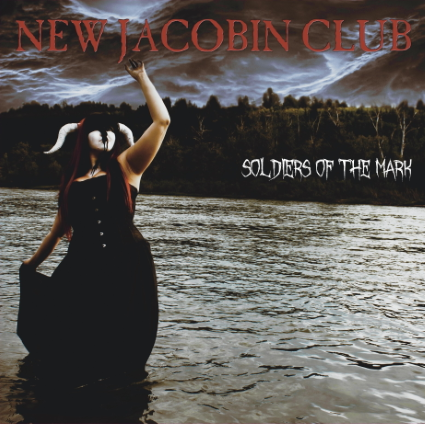 Having grown up in Upper Silesia, Poland, I am quite familiar with punk and honestly could never find much to be excited about the genre. I always thought it was too simple, too stripped down. I am also not a stranger to the likes of early Suicidal Tendencies, although a combination of hardcore and punk I find a lot more pleasing to my ears. Generally, though, these aren’t my favorite waters to sail.

Having said the afore, I must admit, there’s a serious appeal to the New Jacobins. Not that they are serious; what with a name a tribute to the tyrants of the French Revolution (which ironically contributed to the development of thought that spawned American Revolution and the birth of the Union). Nor is the subject manner solemn in its message, such as the comparing of a crazy woman obsessed with a man to an angel of darkness in the rather mediocre musically "Angel MMXIV (2014)"…or is it? How does "we will return to Eden without the mark of Cain" (Return to Eden) grab ya?

The lyrical tongue-in-cheekness notwithstanding, musically, this album is actually plenty of fun. Some arrangements remind me of early Prong while others near the metalcore territory of the Avenged Sevenfold variety, especially solos, but every track is surprisingly different and has a catchy melody that leads the song to its very soon conclusion as the songs average about 3 minutes a piece.

Every once in a while it’s good to listen to something that stands out from the pack. I’ll be interested in what these guys and a girl come up with on the follow up.