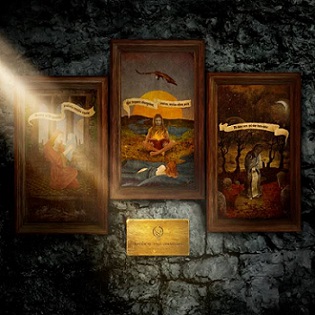 I was a huge Opeth fan back in the early 2000´s when their fifth full-length  "Blackwater Park" was released and I still listen quite a lot to all of Opeth´s music except for maybe 2011´s "Heritage".

Even the superb "Damnation" is on heavy rotation so Opeth´s musical diversity has good grip on my metal heart.

"Heritage" is actually not that bad but I dont think it fits the Opeth label and it was with various feelings I pressed play on the swedes latest opus, "Pale Communion".

I knew from internet banter that Opeth´s eleventh studio full-length would follow in "Heritages" footsteps but I know I´am not alone when hoping for some incoroporation of more of the old musical output we know Mikael love (just give Bloodbath a listen to hear this man´s musical genious).

"Pale Communion" is like "Heritage" an excellent piece of progressive metal with a lot of 70´s influences performed with finesse. The material is both melodic and diverse in style and arrangements. The use of keyboard is done well and it flows with the music without taking a dominant part of it.

Mikael´s vocal is all allways on par with his music and it fits very well. The only sad part is that once again the Opeth I love is missing.

This, like it´s predesessor should be released under another name and logo, because it really messses with its superb metal roots.

"Pale Communion" works out fine and after 3 consecutive spins I´am still not fed up, but where agression and intensity dominated, now the depressive and thoughtfull has taken over and the musical landscape and who would have thougt that some 20 years ago?

FORCE OF DARKNESS – Absolute Verb of Chaos and Darkness