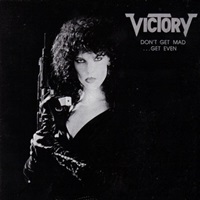 VICTORY – Don’t Get Mad Get Even (Re-issue)

Germany’s Victory may not have been a huge hit in North America, but they have made a decent European impact through their melodic brand of heavy metal. Featuring vocalist Charlie Huhn, Accept guitarist Herman Frank, and infamous producer / guitarist Tommy Newton, along with bassist Peter Knorn and drummer Fritz Randow, the second album "Don’t Get Mad Get Even" originally hit the streets in 1986, finally gaining a reissue some 28 years later from Yesterrock.

These 10 songs have a lot in common with the L.A. Sunset Strip scene- just put through a German chorus and riff filter. Be it swanky and bluesy for "Not Me", a little more Randy Rhoads/ Ozzy influenced on the double bass charging "Hit and Run", or just straight forward, melodic guitar driven fare like the closer "Running Wild" – this is designed for quick hooks, fist pumping, and audience chanting. Charlie’s voice has that Brian Johnson flavor, and occasionally hitting shrieks that could make dogs whistle. There are no bonus tracks, and the sound is decidedly older – be it the synthetic snare snap, and lower bass frequencies, so prepare yourself as this is more of a guitar and vocal oriented album.

Those who want more 80’s nostalgia will enjoy Victory’s second album more so than people who are casual fans of the melodic metal genre.