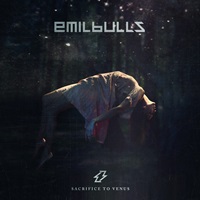 Diversifying from their conventional power metal platform, the alternative/modern metal act Emil Bulls hail from Germany, and certainly perform a testosterone fueled form of music on this 13 song record "Sacrifice to Venus". Between Christoph v. Freydorf’s duality in terms of tender clean melodies on "Gone Baby Gone" and "I Wanna Feel You" and the opposite, blood curdling screams that recall classic comedian rants from Sam Kinison on "Pants Down" or the title cut, and the quartet’s penchant for breakdowns, guitar squeals, and obvious hook elements – this is a tough album for my ears to handle.

White Zombie meets Trivium musically on "Hearteater", while the fairy tale meets profanity laced "Rainbows and Butterflies" has a whiny, semi-rap aspect that downgrades the adequate Stephan Karl/ Andy Bock led guitar hook and massive rhythmic breakdown that should make the most passive person go berserk. I’m not saying Emil Bulls doesn’t have songs that can be catchy, entertaining, and of substance: "The Way of the Warrior" pummels in a melo-death manner while "Man or Mouse" could be a future party anthem.

"Sacrifice to Venus" just has a lot of North American groove tricks, guitar effects, good cop/ bad cop vocals, and alternative rock / commercial melodies that probably sustain Emil Bulls a decent following in the 25 and under market – but this grows old quickly for me, as I’ve heard hundreds of similar acts that can’t separate themselves from the veterans.