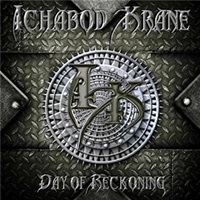 Early Queensryche, Judas Priest, and Primal Fear are three primary bands that have a similar vibe that Ichabod Krane put across in songs such as "Hypnotized", "Final Warning", or the ballad "Nothing Without You". Jeff’s voice has elements of Midnight, Geoff Tate, and James Rivera at heart – sometimes reaching a bit too much for excessive highs when he would be better off using more of his mid-range versatility for aural balance ("Dark Valentine" and "Struggle Within" being the two best examples of where he could use a little more restraint).

The production values are certainly barebones too – probably a result of having to record in home studios and then piecemeal it together from there, leaving Tom’s drum tones very synthetic and not as natural as I would prefer from a traditional heavy metal outfit. Given the fact that we have four musicians who are not newcomers, hopefully the second effort will straighten out these small deficits and the songwriting/ performance chemistry will be stronger as a result. For now, Ichabod Krane is a decent US band to check into if you miss a lot of that 1980’s classic style.