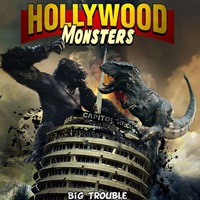 Expect 11 tracks in the late 70’s / early 80’s hard rock mold – interactive instrumental sections full of ‘jam-type’ moments, and a template that fuses a lot of Deep Purple/ Whitesnake spirit. Instantly hooking you in through "Move On", the album shifts between sultry numbers such as "The Ocean" and the title cut or heavy handed rockers fill of spunk and musical chemistry, such as "Underground" and the Dio/ Sabbath like 8 minute epic "Village of the Damned". Steph has an intoxicating voice that matches up the classic bluesy hard rock style Hollywood Monsters delivers – probably gaining a lot of comparisons to Mike DiMeo and David Coverdale.

I’m glad that Tim was able to cajole Steph out of his self-imposed retirement – because it’s proof that often the most talented fade away if not given another chance to showcase their true entertainment values. Sometimes it’s not about image, flash, explosions, chaos – but the heart and soul of music. Hollywood Monsters understand this, much like we experienced a few years earlier with Black Country Communion.

If this is going to be a one-off album, then be thankful to hear these great musicians playing together in this way. Hollywood Monsters may not be the most ‘in style’ band in today’s social media driven times, but rest assured there will be plenty who devour their throwback, classic hard rock style.