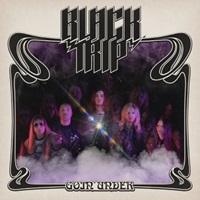 Starting as an idea between Swedish metal veterans in 2003, the quintet Black Trip contains some serious players very familiar to those who follow heavy metal ardently. Joseph Tholl plays guitar for Enforcer (but sings for this act), while Jonas Wikstrand drums for Enforcer and this band. Guitarists Sebastian Ramstedt and Peter Stjärnvind along with bassist Johan Bergebäck all played in Nifelheim from 2006-2013 together. The mission: to recreate some glorious NWOBHM with twinges of 70’s era bluesy hard rock in there for energy.

"Goin’ Under" is the debut full length, and with only 8 songs and 34 minutes of music, the five-piece don’t waste any time getting down to the business at hand. Close your eyes, open your ears, and feel transported back to 1976-1981. Imagine smoldering twin leads that aren’t shred exercises but fusion of the best work from Thin Lizzy and Iron Maiden on "Tvar Dabla" while Joseph’s soothing rock voice may not be the most soaring you’ve ever heard, but it glides effortlessly into moving tracks like the semi-ballad "Thirst" just as easily as the direct hard rocking "Radar". Remember Paul Di’anno era Iron Maiden circa the self-titled effort? Black Trip certainly do on "No Tomorrow", a lot of the buildups between the main verses straight out of "Phantom of the Opera"/ "Transylvania" guitar school, the vocals even channeling a lot of Paul’s phrasing and punk-like attitude.

Favorites change by the day. The mid-tempo highway cruising "Voodoo Queen" has a lot of Saxon appeal, while "The Bells" bursts at the seams through its vocal and guitar harmonies, sure to set axe crazy maniacs on fire. All killer, no filler is their mantra, and I really think they’ve achieved their goal on this debut effort. Obviously we will have to be patient waiting for a second record as Enforcer is the main going concern for Joseph and Jonas, but I feel Black Trip deserves just as much attention if you want some newer ‘old school’ British-styled heavy metal.