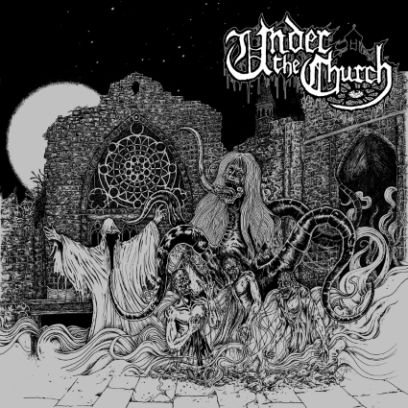 UNDER THE CHURCH – Under the Church

Under The Church is the latest addition to the retro swe-death wave that are flowing in over the metal land. Only this time it´s not men in their early 20´s that are hammering out chrushing old school death metal. This time is some of the pioneérs from the old days that are having some form of comeback.

Lars Henriksson and Erik Qvick both where part of groundbreakers Nirvana 2002 that ruled the swe-death land back in the early 90´s. Vocalist Orvar Safstrøm (who ruled the world when guesting on Entombed´s "Crawl" EP) is the only Nirvana 2002 member who is not part of Under The Church.

UTC released an demo last year and now they´re out with their S/T debut EP and my hopes where sky high when I received this in the mail. Sorry to say it did not live all the way up to my (Nirvana 2002) expectations. The music it self where heavy but listenbale without any fancy smancy triggering and so on, but the overall feeling did not hit me the way I was hoping. The material devided on seven tracks where all pleasable and chrushing in both performance and sound, it just lacked something essential. Maybe my hopes raised the bar to much but the EP, after a couple of spins still remains quite unclear and not to memoribale. Maybe I have to give this more time (hopefully), but my first impression is just not all that.
The vocal is good, but does nothing to impress. The musical arrangements is what makes "Under The Church" it´s money (and time).

This if for sure the start of something great, and when the artists in Under The Church are who they are, we are sure to (again hopefully) be blown away on their debut full-length. This is only the beginning!