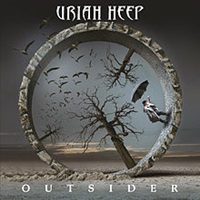 UK hard rock veterans Uriah Heep charge forth on their 24th studio album "Outsider". Guitarist Mick Box remains the lone original member, but vocalist Bernie Shaw and keyboardist Phil Lanzon have been in the band now for 28 + years – so the vision and integrity are firm on high quality songwriting and performances. We have another 11 song platter of old school oriented hard rock- organs and guitars working in tandem as Bernie’s slightly progressive/ psychedelic melodies sink deeper into the brain.

I enjoy most the sideways Box shuffle for "Looking at You", the toe tapping "Jessie" where Lanzon’s thick tone recalls the best work of Jon Lord and Ken Hensley melded together, and the high energy (at least for Uriah Heep 2014) title cut which has a little bit of instrumental spunk for the rhythm section of bassist Davey Rimmer and drummer Russell Gilbrook to tackle. Debate reigns over whether the old guard really care about their favorite bands pumping out new material and would rather just take in the classic live – but it would be a very sad world if as humans we aren’t allowed to express fresh ideas in our 50’s and 60’s just because rock music appears on the surface to be a young man’s game. There is so much to take in listen after listen: particular background vocal harmonies, stellar musicianship, and a natural positive attitude make Uriah Heep so exciting on "Can’t Take That Away" and the breezy "Kiss the Rainbow".

Sure, the band will probably never top "Magician’s Birthday" or "Demons and Wizards" – but "Outsider" does not stain their legendary status, and in the end can deliver quality entertainment at a reasonable price point.