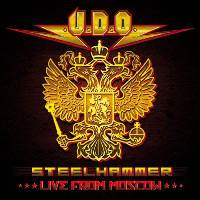 Released this May, the Steelhammer Live package includes DVD/Blu-ray and 2 CD. For this review I will be looking at the audio portion only but video clips are available from both links below.

The first question fans will ask is why? After all, ‘Live in Sofia’ was only released in 2012. As to the that, I suppose it has to do with line-up changes and Udo wanting to show off his new guitar team, now up to two members and firing on all cylinders. Secondly, there is almost no overlap in tracks (maybe one, I think shared by both) and as you can guess from the title, this release contains several tracks from his latest studio album and only ‘Metal Heart’ from the Accept repertoire.

First off the production is excellent, although not that live in feel – are they really that good on stage or is this overdubbed heavily? In any case – there is no complaint from me. It sounds great. Then to the tracks – 21 lessons in classic Teutonic metal in the vein of 90’s onwards Judas Priest or Accept. Udo is at his razor blade gargling best and the backing band is machinelike in its solidity.

Best of all are the songs, each of which makes minimal impact at first, until you get to the chorus and the hooks begin to sink in. I wasn’t familiar with quite a few of the tracks and was surprised at how many catchy lines there were and how accessible and listenable this record is. So you don’t have to be a prior fan of the band to enjoy this one. Long-time fans are in for a real treat – this is U.D.O. at their best and not to be missed.