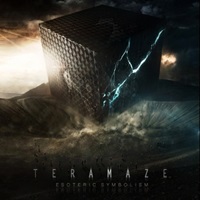 Progressive metal in 2014 has wide open connotations. Thanks to advances in technology, nuances of the modern world infiltrate the sonic outlook of the genre. Melody is still prevalent, but there are also heavier and disjointed aspects that can make things more spacious and complex in terms of colors. "Esoteric Symbolism", the latest album from Australia’s Teramaze, certainly follows this template. At times traversing progressive metal, modern metal, thrash/death, and alternative elements all within the same song (check out "Parallels- Dual Reality"), these musicians do not seek to be followers but rather leaders of their own movement.

13 songs that incorporate influences as wide as Sevendust, Annihilator, Animals As Leaders, Alice In Chains as well as Dream Theater- handling arrangements in a reasonable 4-7 minute timeframe but always maintaining a degree of hook orientation so that you never get lost in technical complexity. Teramaze churn the brainstem, offer hypnotic vocal melodies at times, and know when to go full force or lay back for introspection. Favorites include the fast and furious "Punishment by Design" and the rhythmically enticing "Line of Symmetry" – probably containing one of the best choruses I’ve heard from a band of this caliber in quite some time.

This is an album that can take a little while to fully engage with – but trust me the rewards come out after the initial exposure to every track. "Esoteric Symbolism" should elevate Teramaze into bigger slots on festivals and hopefully stronger tours, as they certainly deserve broader attention through the progressive community.