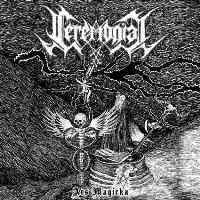 ‘Ars Magica’ is the first official release from Chilean act Ceremonial. As an export from South America you’ll probably be expecting some bestial black death, and you wouldn’t be far wrong, but in this case the primitive is tuned down slightly in favour of some thrashing rage. It is a mixture that works well. The songs are direct and to the point, with plenty of real speed on offer (ie. the guitars are fast too – not just the drums). There are also plenty of slamming slow parts that have most likely caused next snappage in clubs all over Santiago.

Ok, so while there is something really likeable about this one, it isn’t going to change the face of South American metal as we know it. But so what? I still enjoyed it and look forward to seeing how the guys develop on a longer release. By the way – apparently ‘Ars Magica’ isn’t Spanish for ‘Magic Arse’. That is ‘Culo de Magia’!

A LAND BEYOND THE SEA – Weltenwanderer