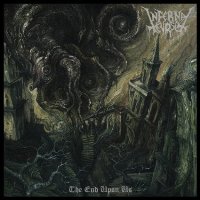 INFERNAL CURSE – The End Upon Us

Argentinian trio Infernal Curse offer up some pretty typical South American fare: primitive, apocalyptic black/death metal that harks back to the late 80’s – early 90’s. This approach can be hit or miss for me. Sometimes I find there to be too much bluster and darkness. The musicianship can be messy and the stylistic concerns can overtake the indispensible need for good song-writing. Infernal Curse manage to avoid most of those pitfalls (except perhaps on the Hadez cover track which is the weakest thing on offer here).

Other than that, ‘The End Upon Us’ is relatively tight. The title track offers some powerful riffing that reminds me of early Morbid Angel. On the downside, it does become a little tiring towards the end of the slower break and the solo is pants. Up next is ‘Lascivious Malevolence’ which throws more bestial darkness at you while keeping the early DM vibes alive. ‘Waters of Phlegeton’ brings the original part of the MLP to a close, leaving me happy but a long way from wowed.
There is something likeable about Infernal Curse when they are thrashing along at top speed, but this isn’t really enough to allow them to distinguish themselves in such a growing scene.