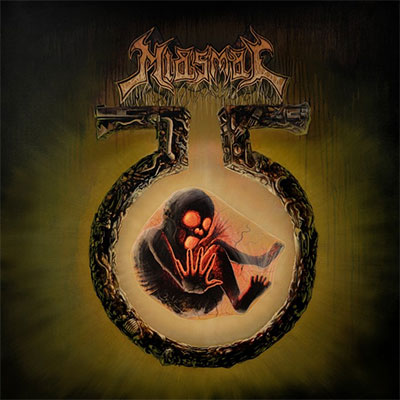 This second album from Swedish death metal quartet Miasmal is another exercise in old school ethics and execution. Recorded in a mere 7 days, "Cursed Redeemer" spits out 8 tracks in 37 minutes, raw to the bone and reminding the listener that early Entombed, Discharge, and Bolt Thrower has not vanished from this particular set of musicians and their songwriting platform.

Vocalist/ guitarist Pontus Redig has this savage, unbridled scream/ growl nature that is slightly punk, obviously metal, and makes the faster "A Veiled Remembrance" and follow up "Until the Last" instantly headbang worthy. You can expect the heads down speed trilling, low end bass tone and Slayer-esque lead breaks that just evoke evil thoughts throughout. There’s nothing overly technical about the material – Miasmal prefer to keep the songwriting straightforward, the groove aspect natural, and the emphasis on the almighty pile of riffs, and that’s fine by these ears.

Recording the album at Studio Fredman, you would think you’ve taken the Tardis back in time to 1990 or 1991, the choices in terms of guitar tone, snare, double bass, and vocals very much in line with the early formative years of Swedish death metal. The title track wastes no time in making its hook known, the crunchy guitars leading the charge and Pontus plus fellow axe slinger Magnus Andreasson laying down this dual layered attack of carnage ripping parts as they trade off leads throughout the 4:31 timeframe.

Miasmal prove you can be intense and groove-worthy without sacrificing for commercial enterprises. "Cursed Redeemer" bleeds in a death metal bath of familiarity – and as such should be an early favorite in that sub-genre for top 2014 album.