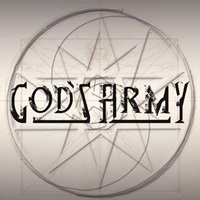 A German melodic power metal act that features notable veteran musicians such as ex-Helloween/ Firewind drummer Mark Cross and former Scanner bassist/ vocalist John A.B.C. Smith, the duo decided to recruit guitarists Don Amiro and Ian O’Sullivan and become God’s Army A.D. This is their debut album, a crisp 8 song effort that could be a throwback to an older era because the playing time is under 40 minutes – giving me more time to really dig deeper into the material at hand.

9 years in the making (Mark spent time in Firewind, John recovered from a severe car accident), this has the spirit of NWOBHM running wild – relentless in youthful spirit and up-tempo attack, loads of Motörhead, Iron Maiden, and Raven at hand in songs like the bass pumping "Gods Must Be Crazy", the early-Ozzy attacking "Waiting for the Miracle", and moodier/ atmospheric laden "Coming Back to Life". John’s voice is suited to the cause, the Teutonic emotion penetrating the skull in a slight Andi Deris meets early 80’s British manner – impressing me the most through the charging opener "The World That Never Was" (with some Iron Maiden background ‘woahs’ for good measure) and the high octane "Hear You Scream".

Everything you expect from a melodic power metal in terms of twin guitar harmonies, steady rhythms, sing a long tailored choruses, and a boatload of hooks is in here. I want you to understand God’s Army A.D. approach their style from a 1980’s British background – the power comes through without succumbing to ‘happy’ chord choices or cheesy melodies. A lot of the older acts would be wise to check this effort out and apply to their own creative efforts down the line.