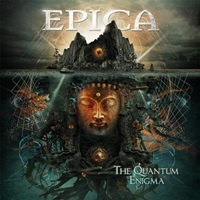 Symphonic metal has a healthy following across all parts of the globe. Its multi-dimensional platform both musically and vocally lends itself to appeal from a wide cross section of fans on the commercial and heavier ends of the spectrum. Epica has advanced up the ranks to fan favor and acclaim through their five studio records. Recently celebrating their 10th anniversary as a band, the sextet now release their sixth studio album- taking a bit of a risk in the production realm through leaving the safety of noted producer Sascha Paeth for Sandlane Recording Facilities in the Netherlands with the up and coming Joost van den Broek.

Outside of that, "The Quantum Enigma" is very similar to what you’ve come to expect from this band. 13 tracks and almost 70 minutes of thunder, lightning, tranquility, bombast, almost a theatre of the mind coming to life – keyboards setting the stage symphonically as the guitars chug along and the dual Simone Simons clean melodies working side by side with the death growls of guitarist/ main songwriter Mark Jansen. The hooks can come from all angels – the choir chorus for "Unchain Utopia", the extreme guitar riff that slays through "Chemical Insomnia", the quiet piano and clean guitar against Simone’s comforting melodies on the Blind Guardian-like folk-type ballad "Canvas of Life" – but overall I’m left unimpressed because the assembly of parts is just that… parts and not complete songs.

Try as I might, I find even the epic tracks such as "Sense with Sanity- the Impervious Code" and closing "The Quantum Enigma- Kingdom of Heaven Part II" struggle to attain any sort of momentum as the transitions are over-thought, amplifying layers of sounds that fail to shift the material into any sort of prolonged retention. Who am I to doubt what Epica writes and performs doesn’t work- the proof is in the ticket sales and fan support. I guess I would rather experience this in a live setting where Epica excel through the use of proper lighting and stage shows – because for me "The Quantum Enigma" is more of the same symphonic metal that won’t produce many highlights a decade down the road.