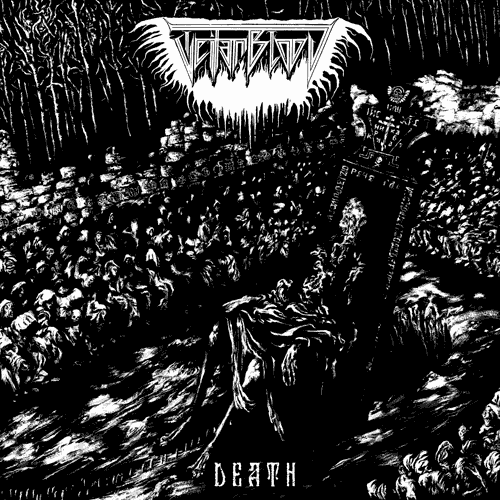 Teitanblood took the death metal underground with storm back in 2009 with their stunning debut "Seven Chalices". Their brand of ugly and just horrifying death metal is about one thing only, to make you sick and uncomfertable. A little like early Portal they manage to make you dizzy and with nausea after listening to their creepy and distorted as hell brand of extreme metal.

The spanish duo startet out back in 2003 but since their music is for the weird tastes only they have managed to stay relatively under the radar since then.
"Death" is their second full-lenght and an anticipated follow-up to the formidable debut back in 2009. And one thing is for sure, it you think "Seven Chalices" was an trying listen, "Death" is not for you. This time the extremeness is taken even further but if you are digging the debut like me, you´ll find it quite pleasing.

The sound is just (in a postive way) shit, the distortion all over the place and the music itself both scary and ugly. Personally I´ve had to give "Death" a couple of spins before it settled in but when it´s in you´ll get to appriciate the odd twists and weird arrangements and like me, just enjoy the ride.

Teitanblood is together with Ævangelist and Portal contenders for making the most demanding extreme metal these days. And like the forementioned, Teitanblood delivers on all acconts and have once again created a monsterpiece of extreme metal.

Try it if you dare!

INFERNAL CURSE – The End Upon Us