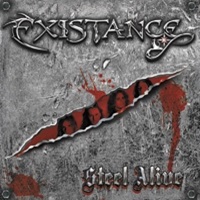 Hailing from France, Existance is a quartet who perform in a classic 80’s heavy metal style: the type that makes you break out leather and wave your fist in the air to anthem style numbers. Vocalist/ guitarist Julian Izard is the son of speed metal H-Bomb vocalist Didier Izard, so you know the lineage means there is metal coursing through the generations. "Steel Alive" is their debut album after a couple of demo releases during their 6 year career, an 11 song record that features a lot of fiery, melodic guitar runs, powerhouse multi-octave vocals and rock solid drumming.

A foundation of British and US metal comes up most when taking in exemplary tracks such as the uplifting "Slaughter", Judas Priest-oriented "Close to the End", and guitar harmony oriented "The Siren". Julian’s voice has in key confidence and versatility from top to bottom – for a younger musician he is very familiar with the likes of Rob Halford, Bruce Dickinson, and Geoff Tate. Second guitarist Antoine Poiret along with Julian handle the riffs and lead breaks on a graceful tip, never one to overrun these tracks on a shredfest. Bassist Thomas Drouin and drummer Alex Revillon know how to accent the songs appropriately and throw in the little thrill moments during the transitions – making the Primal Fear meets Accept-ish "Dead or Alive" and street anthem "Get Away" two other highlights for Existance.

I do believe that as the older bands slow down their touring activities and assemble their final studio recordings, the public is going to require a changing of the guard for the traditional heavy metal scene to thrive in the eyes and ears of the youth. Existance can be one of those bright beacons, as "Steel Alive" has one foot in the past and another delivering original tunes for the present.