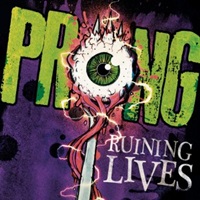 Vitality is a many splendored element to a successful life. New York’s Prong seem to have a second career resurrection following their late 80’s/ early 90’s dominance in crossover/thrash where they regularly slugged it out on the road and had impressive regular rotation of their videos on Headbangers’ Ball. The sound is a little more magnetic, yet no less explosive, as I sense a little more industrial influence creeping into the post-thrash prototype. "Ruining Lives", the 10th album from the band, doesn’t deviate from their successful formula – and as such should go down like your mother’s favorite dessert offering.

Sometimes the hook is in the drums, as the shuffle sets the atmospheric/ dark crossover number "Remove, Separate Self" – and then the song can be guitar driven and more adrenaline laced, such as the thrash oriented "The Barriers" that contains a few elements of Testament-like attack picking motions. Ultimately, the trio still know how to give and take in terms of the locked and loaded primal Prong sound – check out "Absence of Light" and "Come to Realize" and you’ll see that these gentlemen still know how to get audiences pumped, hooks abound and heaviness the essential element for guaranteed chaos.

11 songs and 41 minutes that should satiate all Prong mavens. They may not get the credit they deserve for bridging a lot of styles and sounds in the US scene together – but their working class brand of metal is 100% honest, pure, and still potent in 2014.