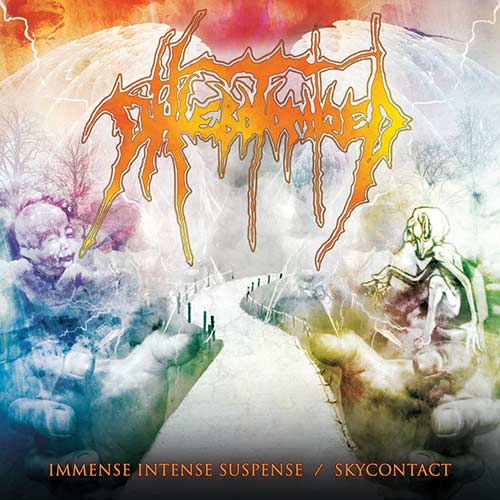 Phlebotomized started out as a grindcore outfit but soon changed their style to a form of avant-garde metal around 1990. Phlebotomized can and should be considered pioneérs of the genre and their impact on the bands forming in the mid 90´s is not to be underestimated.

The dutch band released their debut "Imense Intense Supsense" in 94 and their only follow-up "Skycontact" saw the light of day in 97. The band disbanded shortly after but regrouped in late 2013 witch leads us to a re-release combined as a compilation of their two full-lenghts.

"Imense Intense Suspense/Skycontact" is a beautifull package containing musical history packed to the rim with both massive crushing riffs, some true avant-garde vocals and some (by today´s standards) cheezy keyboards.
The vocal work on both of Phlebotomized´s records are quite entertaining. It ranges from the deep growl of early death metal to clear modern avant-garde, all nicely packed in under the sometimes very odd keyboard.
The material performed is enjoyable if you consider the fact that these guys where among to do this first, but sadly some of the songs (or parts/arrangements on some numbers) just don´t hold the test of time (compared to what we have seen operate in the same genre the latter part of 1990).

Phlebotomized incorporate a lot of differnt instruments in their arrangements and they make it work really well. The use of the violin for example really works great and adds a lot of atmosphere to the overall musical picture.

Phlebotomized is really worth checking out and now is your chance to get to know their odd formula of metal with this re-release.

It will also be quite interresting to hear their new material when time comes around for that.