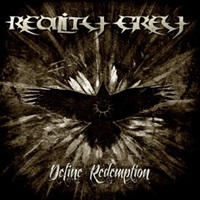 Active since 2004, the Italian modern melodic death metal unit Reality Grey have been carving their way up the ranks through demos and EP/ self-released album output. "Define Redemption" is their second full-length, and first in eight years. Securing a new second guitarist Albo in 2012, these nine songs aren’t your typical melodic death metal fare – the band preferring a lot of Pantera meets Hatesphere heaviness and adrenaline-laced scream tactics.

Drumming wise I like the mixing up of thick power grooves and wild, speedy double bass oriented action on "Deadlock" and the follow up "Rot of Nation". Vocally Tommy has a hoarse roar / psychotic scream combination that will gain some appreciators and send others running away from irritation. The choice of tones and production can also rub certain audiophiles the wrong way- the guitars can be a little thinner than I like for their particular style, and triggered double bass can be a hit or miss proposition for those of us who miss that natural snap and pop.

Despite these distractions, there are a few highlights. "Equilibrium" has this wall of guitar sound opening that brought me back to "Vulgar Display of Power" heydays, and some of the stair step transitions on "Burn the Sky" will induce devil horns and hair windmill action for those into thrash. By the time mood shifting title cut leaves the station , I’m left wondering how many metalheads beyond their twenties will favor Reality Grey’s approach and outlook- as this is very aggressive, angry, and designed for walls of death or stage diving madness over impressive songwriting.

Could have been so much better than what I hear currently.