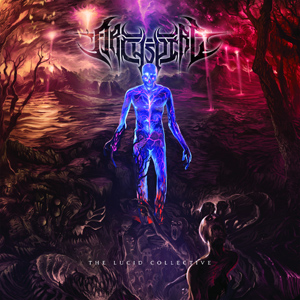 Guitars shred with blazing fury and relentlessly plucked strings at break neck speed. Vicious vocals snap and swarm rapidly fired over whirlwind complex drum patterns in a potent display of 21st century extremity. ARCHSPIRE unleash an insane attack of blistering technical death metal on their second full length "The Lucid Collective", which marks the band’s debut on Season of Mist. The collective from Vancouver in British Columbia, Canada emerged in the year 2009, after a prelude under the moniker DEFENESTRATED beginning in 2007. ARCHSPIRE joined the fast side of tech death, which is remarkably strong within the Canadian metal scene as legendary GORGUTS or their label mates BEYOND CREATION prove. Their debut album "All Shall Align", released in 2011 immediately made a big impact with the aficionados of their chosen style and invited critics to name famed OBSCURA among their peers. This was and still remains to be accompanied by an original lyrical concept revolving around misanthropic themes painted on a background based in science fiction worlds. Yet ARCHSPIRE impressively demonstrate on "The Lucid Collective" that they are delivering more than just a collection of chops and blast beasts. These eight tracks showcase a fast-rising band with supreme mastery of dynamics going hand in hand with determined aggression. "The Lucid Collective" is a definitive statement of intent by one of death metal’s most exciting new bands!

New song: PESTIFER – Witness of the Loss + Within the Void