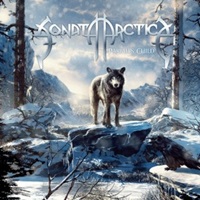 It’s well established that once metal fans latch onto a certain band and particular sound/style, they rarely desire anyone straying from the successful formula. Like a favorite brand of dessert, they like what they like and do not hope for a new twist or ingredient variance to make that special concoction. Since these Finnish gentlemen went off the power metal map after 4 albums for the more progressive minded "Unia", various camps have debated the worth of their material over the past few years. Abuzz on all the news sites, "Pariah’s Child" is supposed to be a throwback to some of those early Sonata Arctica records – as vocalist/ songwriter Tony Kakko felt re-inspired while the band were celebrating their 15th anniversary as a band on tour and re-learning a lot of their older songs for special live shows.

Upon initial airing of the first single "The Wolves Die Young" (featuring an intriguing mini-bass solo before the first verse hits from new bassist Pasi Kauppinen), my headspace did move back not necessarily to "Ecliptica" speedier days, but more of a comforting mid-tempo anthem that wouldn’t be far removed from "Winterheart’s Guild". The follow up "Running Lights" and "Cloud Factory" contain more of the straightforward uplifting riffs and semi-symphonic runs that made Sonata Arctica a headlining entity across the globe. On the other side, the experimental themes come up musically on the circus-themed "Take One Breath", as well as Henrik-finger dance meets ‘storm’ oriented "What Did You Do In the War, Dad?" while lyrically a church/ preacher element brings home the humorous tale "X Marks the Spot".

Closing the album with the almost 10 minute epic "Larger than Life" that features exquisite orchestral instrumental moments against stirring Kakko melodies (sometimes whispering to dramatic dynamic resonance), Sonata Arctica ultimately has to please themselves first before the audience will understand where they are at musically and thematically. I believe "Pariah’s Child" is their best balancing act between creativity and appeasing the long-time followers into the group, and as such could end up being one of their most revered records in at least a decade.