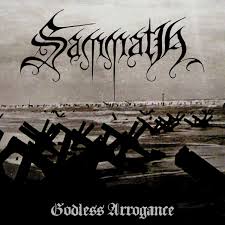 Godless? Plenty. Arrogant? Sure, but of what? Naming an album "Godless Arrogance" hardly denotes greatness. If anything, should the end result fall flat on its face, it could then be credited to the titular godless arrogance. Chuck all the controversy, eeeevil faces and lyrics, "profanity" galore and hectolitres of corpse paint, and many alleged extreme metal bands are suddenly not as exciting. I know, it is fun, it’s heavy metal tradition and I am an old prick rapidly approaching his 40th year on Mother Earth, who has not been laid in almost 2 years. It’s all true. But to me it always was, is and will be about the quality of music combined with a powerful production. Keep your early Darkthrone, give me latter Dimmu Borgir.

When "Tragedy in Triumph" came out, few sang peans to its glory, myself included. Unusually ferocious, Sammath had a clear production that allowed the detail to shine through, such as the Death-like solo in the opener or the Pantera-heavy riff that opened the album. For its sheer originality, I gave it the highest score though it was more deserving of 4.5, but I dreaded the prospect of Sammath potentially focusing on the over-the-top brutality for the follow-up, since some of the more brutal tracks just droned on steeped in pointless brutality, nuances and harmony be damned, and yes, I used the word "brutal" three times to exemplify how too much power can easily blow up in your face.

When I heard the first "single", "Fear Upon Them" I was intrigued to hear what I thought was merely one of many facets of this album. But for every track to sound exactly like the one before and after? What’s the point? Oh, the melodies from the impressive "Triumph in Hatred" are still there, but this time, the horrible production will not let you hear them too easily. Despite the production hailed to be one of aggressive clarity, I beg to differ, my hearing range exceeding that of an average human hamster, joining me in dissent. Frankly, due to its senselessly extreme-for-extremity’s-sake nature, I am having a hard time even classifying it as black metal. It’s more like black grindcore, which, again, may well be due to godawful production. And will you, for the hatred of Satan, get a vocalist and bother that poor old raven nevermore?! Maybe give him a tambourin and pretend it’s indispensable? Worked for Betty from Archie’s comics and truth, they say, is often stranger than fiction.

I knew Sammath were not Watain, but, perhaps, it would be good for the former to take pages from the latter? What makes a song extreme is the light/dark play (as in old Opeth), in place of the constant assault on the eardrums with an assembly of noisy riffs that bleed into one intolerable mess. Indeed, many albums heralded as classics of extreme metal will always be absent from my CD collection for reason of mismanaged musical insanity. At the end of the day, Watain’s "Sworn to the Dark" is still 10 times more devastating than "Godless Arrogance", and a pleasure to listen to, at that.

Sammath is godlessly arrogant, all right. Hardly in a good way. If you illegally download it you’ll have only yourself to blame.