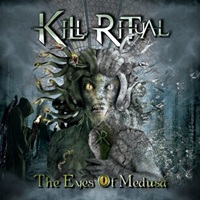 KILL RITUAL – The Eyes Of Medusa

California thrash band Kill Ritual return after a solid debut album "The Serpentine Ritual" with the all-important follow up "The Eyes of Medusa". Formed by ex-Imagika guitarist Steven Rice and ex-Dark Angel bassist Danyael Williams, the quartet also has vocalist Josh Gibson and drummer Gee Anzalone in their ranks.

Musically the 10 songs feature a number of strong tricks and licks to differentiate the band from the prototypical run and gun thrash act. The riff run and galloping nature come from an American 80’s power mold at times on "Hair Trigger" and the energetic, double bass driven follow up "Never Get Me". Steven’s leads even possess a lot of fiery passion from the Randy Rhoads meets Michael Romeo school – fluid and making sense for the harmonically charged "Ride Into the Night" and very tasty on the dark Firewind-ish "Just Another Sin". Overall I would put Kill Ritual close to recent Death Angel along with a splash of Nevermore as to their main reference points in terms of songwriting.

The problem in fully recommending "The Eyes of Medusa" lies in the delivery and general melodic voice of Josh Gibson. I’m not opposed to clean singers in thrash bands- as Joey Belladonna and David R. White would be two of my favorites through the years- but Josh comes from more of the sleaze/ Sunset Strip hard rock mold. Imagine the latter day Kix and Britny Fox channeled through a sneering, youthful Dave Mustaine and you can understand why all enjoyment for "Unleashed" and the opening title track go down the drain due to this screechy, nails on a chalkboard approach.

Maybe some will have no issue handling the music side of Kill Ritual and easily let the vocal faux pas slide. For my money though, I’d like to have more teeth and grit from a singer to match the obvious strong power/thrash on display.