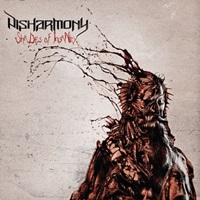 Gaining a bigger international release, the Greek metal band Disharmony with their debut album "Shades of Insanity" straddle the lines of modern metal and power/progressive nuances on this 8 song release. Chris Kounelis upper echelon voice resides in the early Tate/ Khan skill set on "This Possible Lie", while at other times he can also send chills along the best Warrel Dane lines through the doomier march of "Nostalgia".

Musically, the band intertwines a darker, modern tone and atmospheric, progressive atmosphere. Guitarists John Kaorusiotis and Stavaros Gatsopoulos set up the 7:34 "Infinite Astray" for instance with these clean, echoing strains against a soft solo segment (almost like Iron Maiden would do in the early Di’Anno days) before the main heavy part comes crashing through the sonic barrier, something akin to "Cuatro" period Flotsam & Jetsam. Disharmony also delve into Dead Can Dance material for their percussive forward thinking interpretation of "Oman", turning the original on its head from the Middle Eastern themes and traditional instrumentation into a modern progressive metal centerpiece.

Normally I would not be pleased with a 5 year old record gaining a repackaging treatment for a debut album. Given the fact that certain records do stand up with the times, and the fact that Disharmony originally released this on their own, I’ll look the other way- because the critical praise is justified here. Those who desire a little bit of bite and attack in their melodic progressive metal will find "Shades of Insanity" delightful from an inward to outward perspective.

One to watch as I hope they are able to keep ascending up the ranks with future recordings.

LEVIATHAN – Beholden to Nothing, Braver Since Then