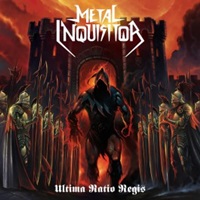 Old school metal is near and dear to my heart. Back in my youth, NWOBHM acts such as Saxon, Raven, Def Leppard and especially Iron Maiden took me on an odyssey that still continues 30+ years later. Germany’s Metal Inquisitor are another band who keep the traditional movement alive and kicking, signing a new record deal with Massacre and releasing their fourth full length in 12 years with "Ultima Ratio Regis".

The sonic landscape for the quintet is firmly entrenched in solid, pounding metal with strong guitar hooks, drumming that stays within a pocket but also slices for maximum head to body swings and a vocalist that can take control at the drop of a word with mean intent. Reference points can be Metal Church for "Bounded Surface", Accept on "The Pale Messengers" or Ozzy Osbourne meets Iron Maiden with the marching "Servant of State" – but Metal Inquisitor never liberally steal from any of these acts, they just hone in on the right aspects to create their own explosive songs.

Starting the album off with a guitar/ drum rallying cry worthy of "Digital Dictator"/ Vicious Rumors status, the energetic T.P./ Blumi harmony tradeoffs for "Confession Saves Blood" suck you in right away, as I picture the stage moves and devil horns signifying victory- along with a great tip of the cap instrumentally from 2:34-3:02 to the great lead break during Iron Maiden’s "Remember Tomorrow". Vocalist El Rojo has an engaging, fun delivery that may not necessarily be the most soaring a la Halford/Dickinson, but instead has that British-like charm of those late 70’s/ early 80’s artists who brought their wares to an audience craving new music.

10 songs that rule in 2014 and will rule 50 years from now, current favorites include "Burn Them All" and the 7:33 majestic closer "Second Peace of Thorn". Metal Inquisitor= German old school winners to the bone.