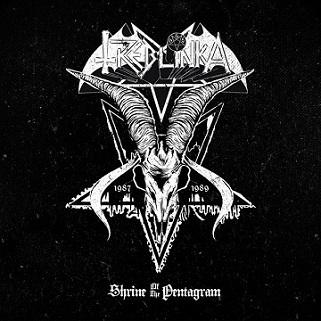 Before Tiamat understood how bad their first band name was, they called themself Treblinka. I will not comment the extremely bad name choice anymore but only the music on Century Media´s re-release of their first demos and live recordings before the swedes changed their name to Tiamat and released some really groundbreaking doom/death metal releases in the early 90´s.

This compilation aptly called "Shrine of the Pentagram" contains three disks where their first demos on disc one is the one that is worth your while (and money). The live recordings of the same material on disk 2 and 3 are for diehard fans only.

When Treblinka formed back in 1987 their blackish doom/death metal was right up there with the other swedish pioneérs of the genre.

The formula was primitive but effective and (for the time) they sounded evil as hell.

The vocal is grim and fits the tempo and intensity of the overall sound very well.

The material works out fine even today and the murky production sounds just like that vintage feeling/atmosphere new bands of today are trying to achieve.

As mentioned earlier they changed their name to Tiamat and released three astonishing doom/death metal records before changing style (and logo) to a more goth rock approach.

Tiamat where a personal favorite of mine back in the days and if you liked their death metal back then and are wondering how they got there this compilaton is a nice piece of metal history to check out.