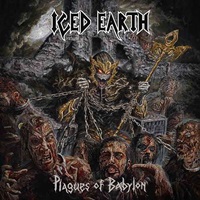 The model for metal bands to stay relevant in the public eye remains familiar to most long-timers. It’s all about delivering in the flesh live: be it a sweat club to hundreds or an expansive festival main stage for tens of thousands, you are measured by the power of the performance. Leader Jon Schaffer of Iced Earth knows all too well that survival is for the fittest in the ever-changing industry, so quickly capitalizing on the successful vocal transition with Stu Block taking over for long-time favorite Matt Barlow in 2011’s "Dystopia" album, "Plagues of Babylon" hits the market to start 2014 and another long worldwide touring excursion.

The album is really a two halves effort: the first six songs a continuation of the "Something Wicked" sci-fi meets reality concept that Jon has developed through the years, while the last six songs are stand-alone cuts. The sound is quintessential Iced Earth- a firm grasp of power metal with traditional and thrash overtones, fueled by strong rhythmic triplets and the multi-octave lung capacity and confidence from Stu. Gaining supplementary support from good friends Hansi of Blind Guardian for vocals on "Among the Living Dead" and Michael Poulsen (Volbeat) plus Russell Allen (Symphony X) for the cover of "Journeymen" (a country outlaw song), the material ranges from the 7:47 opening epic title cut to the exotic riff roller coaster "Democide" that recalls "Night of the Stormrider", a cool power ballad in "If I Could See You", on through to the dramatic "Spirit of the Times".

Jon Schaffer and the gentlemen of Iced Earth know how to write and perform in a classic way: the material has enough variety that you never feel like skipping tracks and can hardly believe 61 minutes has elapsed. The renewed energy in terms of consistent high level live performances translates in the songwriting on this album- you can just feel the quintet giving their all in every aspect, from leads to instrumental sections, from verses to choruses, all the way through to production and artwork.

Never giving in and never giving up- Iced Earth are one of the best examples of metal’s lifetime commitment. "Plagues of Babylon" is another stellar effort in a long line of fine albums from the group.