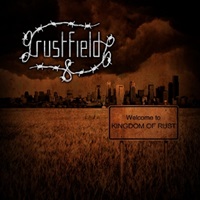 An Italian progressive rock/ metal act with a debut album "Kingdom of Rust", Rustfield was born in 2007 so the quintet certainly have had a long time to cook up and compose these 12 tracks. Rather than set out for a distinct sound, I feel that the material seems to have a bevy of diverse ideas- some progressive, some metal, some psychedelic, others ambient and more atmospheric/ new-age oriented. What does this mean for the listener?

To my ears its confusion, as you patiently wait for segments to hit you and stay with you. Keyboardist/ vocalist Andrea Rampa has a comforting normal range, but really strikes a nerve in a nails on the chalkboard way when he screeches through the high parts (imagine a hoarse Sebastian Bach). Often the progressiveness comes out of each musician choosing to accent different parts as a circling/ echo-type refrain lays the ground work – even in the shorter tracks such as "Losing Time" and "Sacrifice" that prove you can be entertaining in a 3-4 minute arrangement.

The longer cuts allow the quintet more of a chance to flex their harmony/ virtuoso skills- dazzling but never overpowering the texture and feel of the song. "Out of the Blue" as a 9 minute plus instrumental opens with keyboard segments while the electric guitars support the chord choices in an understated manner – using some pomp rock and Yes/Saga-like measures before the song transitions into exotic/ Middle-Eastern measures, very light and airy. Meanwhile "High Waters" contains a duality of electric/keyboard showmanship that kicks in around the 5:30 mark and continues until 10 minutes, where the cascading water effects ring out the concluding moments.

This is an album that needs some time to develop a deep respect for. Rustfield need to stick to their strengths as far as building shorter compositions, while axing the high pitch action for another vocalist capable for those parts. I’m intrigued enough to give these Italians more of a chance, as promise is there to differentiate themselves from the regular progressive rock/ metal pack.