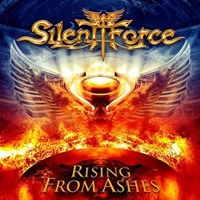 Alex Beyrodt can be forgiven for the 6 year lapse between studio records for power metal outfit Silent Force. His guitar skills are in high demand, beyond his own work in the bluesy hard rock act Voodoo Circle he also is active in Sinner and Primal Fear on a recording and touring basis. With DC Cooper leaving to rejoin Royal Hunt, everyone wondered who would take the microphone for the fifth album "Rising From Ashes".

Well wonder no more, as ex-Letter X/ current PowerWorld singer Michael Bormann has taken those duties head on, and along with newest recruits Mat Sinner on bass and Alessandro Del Vecchio on keyboards joins mainstays Alex and drummer Andre Hilgers for an outstanding 10 song, 44 minute journey into melodic power metal with shimmering guitar work, the right amount of keyboard accents and overall high caliber songwriting that can gain a wide birth of fans.

Songs such as "Living to Die", the bluesy "Before You Run", and anthem-oriented "Anytime Anywhere" possess a lot of qualities that are endearing to fans of Masterplan, Brainstorm, and Astral Doors. Michael has the knack for choosing the right grit and tone to emotionally touch the heart strings and then go for the gusto all in the same sequence. Alex certainly can shred in the best Blackmore meets Malmsteen manner, but it doesn’t mean a hill of beans if you can’t write and deliver great riffs into memorable songs- and with "There Ain’t No Justice" and "You Gotta Kick It" Silent Force could have two monster live hits on their hands, the latter’s main hook something that rivals the best arena material of the 70’s and 80’s.

Superior knowledge from veteran musicians means that "Rising from Ashes" succeeds because it’s okay to often lay back and play in the pocket to benefit the needs of a certain song. Alessandro’s use of Hammond organs for "Turn Me Loose" would please all Deep Purple, Rainbow, and early Whitesnake maniacs – bringing the multi-tracked vocal harmonies in the chorus to goose bump status.

Let this be a reawakening, and hope the sixth Silent Force album doesn’t take until the end of the decade to see the light of day.