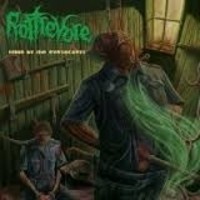 ROTTREVORE – Hung by the Eyesockets

Another "comeback", this time a successfull one..

Rottrevore released the fantastic "Iniquitous" back in 1993 and then when dormant.

They reunited back in 2011 and released a three song demo called "Blind Sided Attack" to much praise among the hungry old school Rottrevore fans.

Dave Rotten and his Xtreem Records (ES) picked it up and re-released it this year under the new moniker "Hung by the Eyesockets" (yes, that got to hurt).

The US based trio is now finally back and everyone(?) is looking forward to their next full-length release (no statement has yet to be decleared about this).

Because Rottrevore is just to good to be left alone. Their Cannibal Corpse formula to brutal death metal just need´s to be heard among the death metal horde.

If you like technical yet brutal yet melodic death metal performed with the skills to match this is for you. The production is also right up there. Nice and clean.

"Hung by the Eyesockets" is a fine piece of US death metal done the way is should be done.