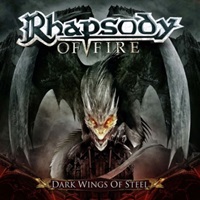 Naturally when a major songwriting member splits from a group like Rhapsody Of Fire, worry sets in as to what the subsequent studio efforts will be like. No one doubts the professional vocal prowess of Fabio Lione, so I walk into "Dark Wings of Steel" with a fresh mind, knowing that Luca Turilli’s Rhapsody "Ascend into Infinity" put him back on the symphonic power metal map in a way the early efforts gained such acclaim.

After a few playbacks, the Alex Staropoli songwriting era doesn’t really excite me as much, the material a little more straightforward in its metal attack, with the symphonic and dramatic flourishes used as a supplement to the sonic outlook. Manowar comes to mind on "Angel of Light" and "Fly to Crystal Skies", while a slower, 80’s Crimson Glory charm heads up the 8:05 "My Sacrifice", the guitar/keyboard chord choices much darker and allows Fabio to move around from pure vibrato into a little bit more emotional mid-range.

Not everything is lost- highlights include the calmer "A Tale of Magic" with a strong main riff that is similar to current Andi Deris-led Helloween and the speedy "Silver Lake of Tears" that contains the right balance of theatrical/ symphonic keyboards and charging guitars that builds tension in all the correct places. By the time the closing "Sad Mystic Moon" power ballad ends, I feel mixed emotions because there’s no doubt the quintet are seasoned, capable musicians within the genre at hand- it’s just too middle of the road in terms of the songwriting to really stand up to past discography.

So please approach with trepidation. "Dark Wings of Steel" places Rhapsody of Fire slightly behind in the separation race, and if they aren’t careful more will turn out to see Luca’s version on the live front.